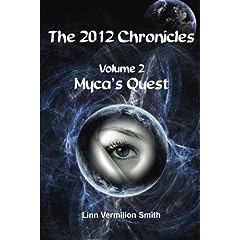 In late 2012, Myca and her friends were transported to a utopian planet called One World along with over a million others of high vibration. It is now 2015, and she has become a Master Emissary whose assignment is to journey back to Dark Planet (Earth) to help the remaining populations raise their consciousness levels and thus their vibrations so that they may also transcend to One World. Joining her in this epic mission are Yeshua ben Joseph (Jesus), Buddha, John Lennon, and many others. The emissaries use teleportation, time manipulation, music, telepathy, and other miraculous works to impress the teachings into the minds and hearts of the entities still living on Dark Planet, which is plagued with climatic disasters, terrorism and chaos, and is rapidly coming to its end. Myca’s Quest is a fantasy that teaches the importance of living in love and joy every day and delivers a message of hope to people confused about the implications of 2012.

Linn Vermilion Smith is a writer and spiritual teacher who lives on the island of Kauai and conducts spiritual retreats with her husband, Cardell Smith. She has written two books in her fantasy series, The 2012 Chronicles – To the One World and Myca’s Quest. Linn was commissioned, through direct inspiration from source, to channel this series. She is currently working on a book with her husband, Cardell, called Quantum Life Changes. This book will outline all of the patent-pending processes taught in their retreats. Her mission in life is to empower others to remember the divine within themselves. She lives in a remote location on the island of Kauai. 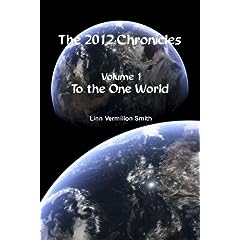 When Rachel and her friends are transported to a utopian planet called One World along with over a million others of high vibration, she discovers it is a twin planet to Earth, which is also called Dark Planet. As she learns about her new home, Rachel finds that teleportation is the only form of transportation, remote viewing and telepathy are the norm, everyone lives in peace, joy and abundance, and society is learning instant creation in the Quantum Field. On One World, animals are revered as entities that have a deep connection to Source Energy and they communicate with Rachel in her job as an Animal Interpreter. Back on Dark Planet, destruction and chaos abound as the Earth is overrun by dark energy and nears its end. Filled with exciting technology such as the Beauty Enhancement Mechanism and recreational Pico Wings, To the One World is a delightfully entertaining fantasy that reminds us of the importance of choosing to live in joy and high vibrations every day.

Linn Vermilion Smith is a spiritual teacher and channel who conducts retreats and seminars with her husband, Cardell Smith. She seeks to empower others to realize the divine within themselves. She travels worldwide and lives on the island of Kauai.